There are a slew of rogue books out there. You know, the kind where the main character is an assassin archetype. Maybe it’s part of my Warcraft upbringing, but I love rogues. They have that immediate sense of mystery and danger, the bad boys of the hero archetypes. I can’t help myself, I’m drawn to them and stories about them. Some are good. Some are not. It is a delicate balance to have a character that kills for a living, but also make him sympathetic and likeable. Jon Sprunk’s debut novel, Shadow’s Son, delivers such a hero. 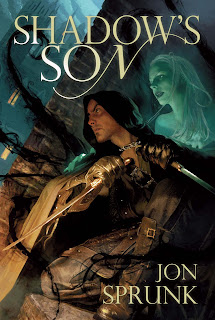 Caim is a man adrift in the adopted city of Othir. He is an assassin whose greatest asset is his control of the shadows he inhabits, giving him the ability to literally slip into darkness to avoid detection. Working for hire, mainly against those with low morals or on the edge of being malevolent, Caim remains just shy of doing something reprehensible. He lives among the poor because mercenary work is not glamorous or rich unless you work for the government. And Othir’s government is corrupt, as Caim discovers when he is hired to eliminate a wealthy, prominent citizen. Only the job turns out to be a set up engineered by a rival with lofty ambitions. Forced to run, Caim takes Josephine, the daughter of his target, in order to save her. Soon our hero is drawn into the political upheaval of the city and forced to step out of the shadows and take a stand.
From there, things go from bad to worse as Caim struggles to clear his name, keep Josephine alive, and find out why the shadows he controls are tainted with an evil that frightens even him. We don’t learn much about this evil in this first book, but it’s obvious it will play a major part later in the series.
One thing that sets Shadow’s Son apart is the presence of Caim’s lifelong companion – an ethereal being called Kit whom only he can see. I love the interactions between these two. She is a sprightly character who is a spitfire and clearly a woman of her own mind. Kit’s ghostly reconnaissance, combined with Caim’s shadow control, makes him formidable. Unfortunately, Caim occasionally takes her friendship for granted.
With Kit being intangible, it isn’t long before Caim starts falling for Josephine. I will admit I was unsure about Josephine at the start. She was spoiled and screamed a lot, but by the end of the tale, her transformation was definitive and sad. The reader feels her pain. She loses her family, her wealth, and her entire way of life. She is dragged to the pit of hell and then stands up in the face of it. Josephine has great potential. Hopefully she’ll never return to being the damsel in distress as she was throughout most of this book, and will become a powerful ally for Caim as he unravels his past. 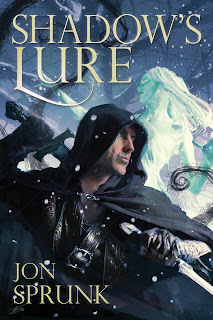 But it is definitely the mysterious relationship between Kit and Caim that draws my attention. Kit seems to know secrets about Caim, which frustrates him greatly because she remains elusive on those matters. There are times when she vanishes, much to Caim’s annoyance, but she always returns just at the right moment (sometimes a bit too conveniently!). Kit is a wonderful character. I’m as desperate to learn more about her as I am about Caim’s past and powers.
I found myself drawn in by the characters and the well-choreographed fight scenes. The world of Othir was politically rich and full of intrigue as it underwent a rebirth through the course of the novel. However, our characters are destined for another place, and perhaps another realm, which I am just as eager to discover. Bring on the Shadows!
Shadow’s Son is a high-energy fantasy story, brimming with clandestine action, sinister shades, and a hint of romance. But it also welcomes back the heart and soul of character to the dark, murky world of assassins.
The second book in the series, Shadow’s Lure, is out now in stores and I will soon have a signed copy in my hand thanks to Dragon*Con. I look forward to reading it and seeing where Jon Sprunk takes these intriguing characters.
The artwork is by the incredibly detailed artist, Michael Komarck, and below you can find the fabulous book trailer for the newest novel.
Follow Jon on his blog, and on Twitter and Facebook.
Posted by Clay and Susan Griffith at 11:12 AM

Im actually reading that on my kindle right now, i find it pretty good (im only about 35% in) and i am enjoying the intrigue and characters alot.

Thank you for bringing this book to my attention. It's on the wishlist.

Thank you, Susan and Clay. You are both very special people.

I was totally put off by the last thing that happened to Josephine. It seem thrown in there for no reason since it had no impact on the story and little real impact on the character herself. I really hate when things are done like that at all but then when it is done for no reason other than some seeming shock value it especially turns me off reading any more from the writer.