Here's What We Did in NYC

We recently visited New York for a few readings/signings of The Greyfriar and The Rift Walker. We had events at a bar in Brooklyn, a restaurant in Times Square, a gallery in SoHo, and a radio station on Wall Street. We were all over the city. It was a busy couple of days, but very exciting. Hopefully we got the word out about Vampire Empire to some people who didn't know about it before.
We love New York. Even without special events, it's fun just to walk around the city.
We made several stops at bookstores around NYC to sign stock and then a few stops in NYC landmarks such as The Algonquin Hotel and Keen's Steakhouse.
Then it was out to The Way Station in Brooklyn. We haven't spent much time in Brooklyn, and this was a fun neighborhood bar with a steampunk/Dr. Who theme. The crowd was small but enthusiastic. One couple came all the the way from New Jersey (no small feat) in complete steampunk regalia.

After The Way Station, we jumped the Q train for Times Square where the Science Fiction Writers of America were holding their annual gala at Planet Hollywood. There we ran into Jim Freund, co-ordinator of the NY Review of Science Fiction and host of Hour of the Wolf (WBAI, 99.5 FM). We met some new people, as well as running into some old friends. 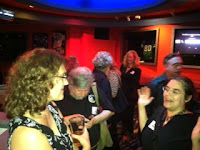 Tuesday included more walking around NYC until the our scheduled reading at the SoHo Gallery for Digital Arts, sponsored by the New York Review of Science Fiction. This was a terrific event, organized by Jim Freund, and the guest host was the wonderful Margot Adler. You may know Margot as a long-standing commentator on NPR or as the author of the classic book on modern paganism, Drawing Down the Moon. She was one of the earliest supporters of The Greyfriar, so it was a thrill to finally meet her. She spoke about reading over 180 vampire novels, and put her finger on the exact nature of why vampires continue to resonate in our modern world. Her theme was that vampires of any era reflect the fears of that age. In our time, vampires speak to our struggle to act morally in the world while still being predators. We read a little from The Greyfriar and The Rift Walker. And then Margot interviewed us and fielded questions from the audience. It was great!
Then finally, Wednesday night (or Thursday morning), we were guests on Jim Freund's Hour of the Wolf radio show. We could have taped an interview, but we wanted to do it live. And originally, it was supposed to be 1:30 - 3:00 am. But it ended up being 12 midnight - 3:00 am. Three hours of live radio! Turns out it was very easy. Jim was an amazing pro and it was over before we knew it. You can listen to part of the show here.
Then it was over and off to the airport.
It was a wonderful trip. And we must say thank you to our friends, June and Sean Lough, who got us where we need to be on time and made the entire trip so much fun.

Posted by Clay and Susan Griffith at 9:33 PM 4 comments: