In the second installment of some visual bits of Vampire Empire, we decided to share some wonderful old pictures of a wonderful old city. Edinburgh. Prince Gareth lives there, high above the Old Town, in the ancient castle.

The city is both lovely and grim. The historical heart of Edinburgh retains much of the architecture of the 19th century (and centuries before too). Most of the photos posted below come from the wonderful www.capitalcollections.org.uk from the City of Edinburgh. Check it out for more old portraits of that city.


Posted by Clay and Susan Griffith at 9:45 PM 3 comments:

The Places of Vampire Empire

From time to time, we want to show you some of the images that inspired aspects of The Greyfriar and the entire Vampire Empire series. In addition to our own travels, we studied a lot of old photos and engravings, and poured over 19th century travel books, to get a sense of how Victorian cities looked and felt. Fortunately, the Victorians loved cameras and most of them couldn't wait to write books about their travels.

We'll start with some images of Alexandria, Egypt, the capital of the Equatorian Empire. These photos are from the late 19th or early 20th centuries. They aren't intended to depict the city exactly as it would appear in The Greyfriar, but they give a sense of that wonderful old city during the Victorian Era, which was the starting point for the Alexandria of our book. 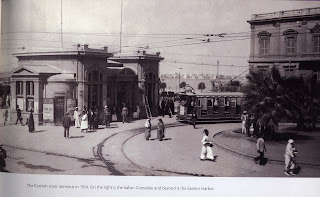 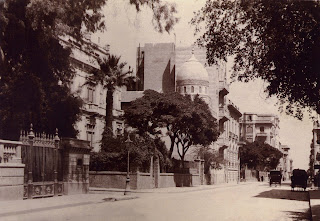 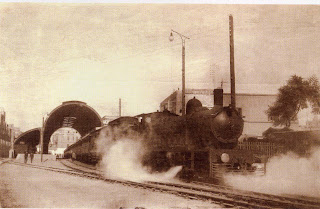 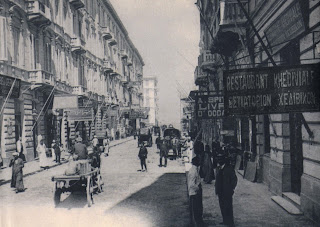 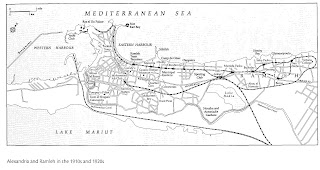 Posted by Clay and Susan Griffith at 5:09 PM 3 comments:

Weekly Book Chat for "The Greyfriar"

Bitten by Books is discussing our novel “The Greyfriar” at their site this week. Feel free to drop on in and leave a comment. We may be doing the same! If you have any pressing questions about the novel, now’s the time to ask! They also have a few topic questions already posed which will generate some lively conversations.
1.) This book combines several very intriguing elements: vampires, alternate history, action, adventure, and steampunk. Which of these aspects did you enjoy the most in the novel, or is it too difficult to choose?
2.) How do you like Adele as a main character? Would you have made any different decisions than she did?
3.) Would you want to live in Gareth’s kingdom under his protection, or would you rather take your chances with the other human populations in the southern areas, and why?
4.) favorite characters?
And don’t forget to use spoiler alerts for those who may not have read the book yet and experienced some of the secrets for themselves!
We look forward to hearing what everyone thinks.
http://www.bittenbybooks.com/?p=35079
Posted by Clay and Susan Griffith at 12:06 PM No comments: 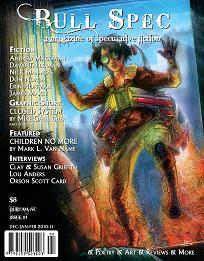 One of the most interesting and exciting things to come out of our home Triangle area in the last year is Bull Spec Magazine. It is a real life print magazine devoted to "speculative fiction" (what we old types still call science fiction/fantasy, but maybe the new term encompasses a wider range than SFF). Bull Spec is the brain child of Samuel Montgomery Blinn, a Durham resident and editor. There have been 4 issues so far, and more to come.

Sam is a tireless promoter of young, and not so young, writers. Even more, he understands the natural isolation of writers, and works to bring writers and editors and artists together as a community. We've attended several events he has hosted and have always been amazed by his selfless interest in others' work. His magazine eagerly publishes unknowns, as well as established writers. He also publishes poetry. He pays money to these writers, not just comp copies.

He does this expressly from an extreme love of speculative fiction and the people who write it because, believe it or not, editing and designing a print magazine is not the fast lane to riches. The magazine biz has always been a tricky and perilous life, but in this age of e-stuff, start-up print magazines are rare and wonderful things. And Bull Spec is a wonderful magazine.

If you live in the Triangle area, you can find it at select independent bookstores such as The Regulator in Durham, Flyleaf Books in Chapel Hill, and Quail Ridge Books & Music in Raleigh. There may be other brick and mortar sources which I hope folks will comment on. You can order it online. You can subscribe.

Buy Bull Spec.
Posted by Clay and Susan Griffith at 7:29 PM No comments: 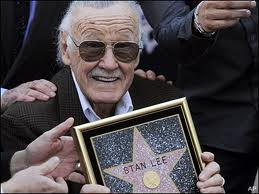 Stan Lee received a star on Hollywood Boulevard. He is 88 years old. He is a genius.

Not because (he claims) he created Spider-Man or Fantastic Four or X-Men or any of Marvel's menagerie. Everyone knows the creative process is collaborative, particularly in comics, and all those great characters owe as much to Jack Kirby and Steve Ditko and many others, as they do to Stan. What Stan did was create Marvel, at least to me. During my childhood, he was the face and the voice of Marvel. His corny hep-cat lingo made Marvel comics fun, even while the books themselves were often relatively dark, or at least darker than the Distinguished Competition of the day. He was the guy on "Stan's Soapbox." He was guy with the 'Nuff Said! and Face Front! and all that wonderful blather. He was the guy that made Marvel feel like a clubhouse full of exciting, amazing characters and creators...and he was inviting me to be a part of it.

THAT was Stan's genius. The creation of Marvel as an idea.

Stan Lee was one of the formative figures of my life...as a writer and a creator. He's one of the Big 3 who shaped my childhood. I've been privileged to meet all of my Big 3, and I'll write about the others at some point in the future. But this is about Stan.

I've met Stan a few times; mainly brief handshakes at conventions. But the first time was the most interesting. It was back in the late 1980s, during the first trip Susan and I made to DragonCon. The entire convention was housed in the Atlanta Hilton in those days. One evening we were waiting for an elevator in the lobby with the mob, and I looked over and saw a guy standing by an elevator, by himself, not surrounded by a crowd, not talking to anyone. I said to Susan, "That's Stan Lee."

This was during the era when Stan was at his lowest ebb of popularity with fandom. He had come off very badly during Jack Kirby's battles with Marvel. The King was a fan favorite; he was the man standing up to the big soulless corporation that stole people's creativity. Stan was seen as a company man and a glory hog, who selfishly cast a shadow over the role that others had played in the foundation of Marvel. He was an old man whose best days were behind him, and who was either forgotten or despised by comic fandom.

But he was still Stan "the Man" to me. And he was standing completely alone in the Atlanta Hilton. So we went over and introduced ourselves. He gave us that Stan Lee grin and we all talked for awhile. He's one of those guys who created a persona over the years and can play that character at the drop of a hat. No matter who he really is, in public he is always Stan "the Man". With the smile and the corny phrases and the wild gestures.

Then after a few minutes, the elevator came. We shook hands and he took off. That was it.

In the years after that, Stan recovered his place in fandom and has become the Grand Old Man of comics. I've seen him several times since at conventions, but I never saw him alone again. He always had an adoring entourage. And now he has a star on Hollywood Boulevard. Nice.

But I'll always remember him from that night standing alone waiting for an elevator. And for just those few minutes, I had Stan "the Man" Lee to myself.
Posted by Clay and Susan Griffith at 8:23 PM No comments: