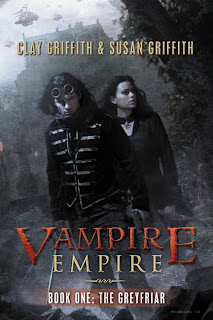 
We'll be attending ReConstruction at the Raleigh Civic Center from August 5 thru 8.

Whenever WorldCon convenes out of the U.S. (it's in Australia this year) there is an American-based convention for those who can't make it overseas. This year it's in our hometown of Raleigh!


We'll be doing a couple of panels and generally promoting Vampire Empire: The Greyfriar. We also hope to accept the Chesley award for Best Art Director for our editor at Pyr, Lou Anders.

Check it out: www.reconstructionsf.org
Posted by Clay and Susan Griffith at 9:32 PM No comments: 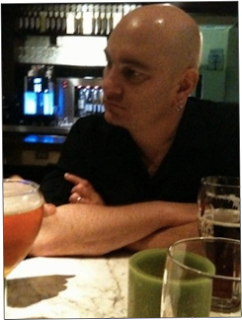 This nomination is well deserved. Nobody has better covers than Pyr Books (just take a gander at Chris McGrath's beautiful cover for Vampire Empire: The Greyfriar). The Chesley is given by the Association of Science Fiction and Fantasy Artists at ReConStruction in Raleigh, NC in August. Unfortunately, Lou cannot attend. Plus, he's up for a Hugo and won't be at that award ceremony either because he'll be at DragonCon (along with us!) during Worldcon. We have various side bets (to be paid in beer) that he will win the Hugo. Now we'll owe even more beer when he wins the Chesley. How much beer could he possibly drink anyway?

While Lou may wish he was at ReConStruction and Worldcon when he wins, it will only add to his fearsome legend that while other editors in the industry are partying at Worldcon, Lou is at DragonCon talking to fans about Pyr's books. That's why he's the hardest working man in science fiction/fantasy.

Congrats, Lou!
Posted by Clay and Susan Griffith at 9:38 PM No comments: